In this article, we will detail how to Upgrade PS3 Hard Drive super slim. but before we start we will take a brief idea of ​​these characteristics.

the PS3 Super Slim looks like a hybrid between the PS3 Slim and the PlayStation 3 FAT. it is smaller than the PS3 Slim, and it measures 11.4 inches (29 Cm) wide by 2.36 inches (6 Cm) high by 9.05 inches (23 Cm) deep, and it weighs a little near 4.6 lbs (2.1 kg). Sony has adopted on its PS3 Super-slim a non-motorized analog sliding game disk cover. It opens manually by sliding the cover from right to left, also by pressing the Eject button.

On the back of the PS3 Super Slim are all the following components: Ethernet, HDMI, optical output, and multi AV output, and on the front: There are two USB ports as on the Slim PS3.

Upgrade PS3 Hard Drive Storage From 12G To 320G Or Replace it:

Updating PS3 Super Slim Storage or Replacing your hard drive is very easy. Follow these instructions for a successful procedure: 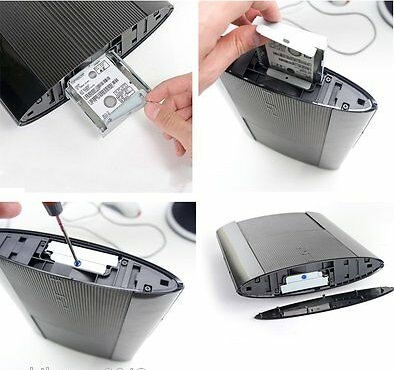 Reconnect your console, after starting up your PS3, you are warned that a new hard drive has been detected, and asks you if you want to transfer all your data from the internal memory to the hard drive. you answer YES.

Copying begins and will take a while (depending on the size of the data to be copied to the new hard drive). At the end of the copy, the PS3 restarts and you can see the new storage in the settings!

More details in the video below: