Update PS3 via USB Drive is possible Now. Carefully follow the instructions explained in this tutorial to successfully update your Playstation to firmware 4.86, 4.87, or 4.88.

To check the Software version on your Console PS3:

Before downloading the system software update, please read the System Software License Agreement carefully to make sure that you understand its terms.

To Update PS3 to 4.86 OFW, there are two ways to update your console: 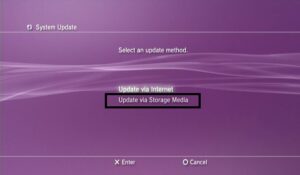 Note: the jailbreak of Playstation 3 on version 4.86 OFW is also available on our Website.

2. if you have a Super Slim or Slim PS3 with the following models: Jailbreak and install HEN on PS3 with OFW 4.86