The Nintendo Switch console officially appeared worldwide on March 3, 2017. It was the first console to be hybrid (console connects with Television or portable console).
Nintendo Switch games come in two versions, Physical Games (on cards) or digital games (you can download them from the Nintendo Store (Nintendo e-shop).

When you buy your Nintendo Switch, you can buy a console pack only, or a pack with a single game (physical or digital). or with several games),

Here is the full contents of Nintendo Switch console box:

The pack is available in 2 versions: with blue and red Joy-con (small joysticks), or with gray Joy-con. 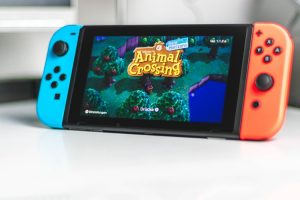 The visual experience offered by the Switch obviously depends on how you play it. On a TV, the console outputs a signal in Full HD (1,920 x 1,080 px), but switches to 1,280 x 720 px in “portable” mode. In both cases, the level of graphic detail is of course far from what a PS4 or Xbox One can offer, but we are clearly dealing with the most powerful portable console on the market. A game like The Legend of Zelda: Breath of the Wild is therefore particularly impressive when played in “portable” mode.

Announced between 2.5 and 6 hours by Nintendo, the autonomy of the Switch corresponds to what can be expected from a couple “4310 mAh battery + Tegra chip”. By setting the brightness to 50%, headphones plugged in and airplane mode activated, we were able to play Link’s last adventure for 3h22 before the console was turned off, which is generally what was indicated by Nintendo. A full recharge, by connecting the console directly to the USB-C charger, took 2h55. It is in any case regrettable that Nintendo did not opt ​​for a fast charging system.

A very powerful portable console.
Ergonomic and well thought-out Joy-Con.
Modular at will.
There is No problem observed between the portable console and the connected television console.
The Famous Game Zelda.

Very fragile crutch.
Average autonomy.
Screen color not ideal (temperature too cold).
Lots of reflections.
Impossible to do anything other than play (for the moment).
Low power of the headphone output.
Any “tablet” design and large screen borders.

Nintendo Switch Diablo3 Edition Pack: This pack was advertised on October 2018 and released on November, this pack contains the Nintendo Switch console in Diablo3 game colors. Plus a download code for Diablo3: Eternal Collection on Switch with an exclusive Ganondorf set.